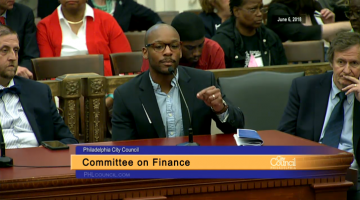 Philadelphia, PA – Terrell Johnson, a community engagement coordinator with the Health Federation of Philadelphia (HFP), and facilitator of HFP’s Tobacco Cessation program, on Wednesday, June 6, provided testimony to Philadelphia City Council’s Finance Committee regarding Bill No. 180522, which would effectively loosen necessary regulations placed on tobacco sales in the City of Philadelphia.

The bill, which was introduced by Councilman Mark Squilla, would undo tobacco regulations passed in 2016 by the Board of Health, regulations for which City Council commended the Board at the time.  The controversial bill drew a large group of passionate Philadelphians to City Hall on Wednesday, both in opposition to and in support of the proposed legislation.  Johnson joined Philadelphia Health Commissioner Dr. Thomas Farley, who heads Philadelphia’s Department of Public Health, and countless others who spoke out against the bill.

Passage of the bill would disproportionately affect low-income communities in Philadelphia, areas already plagued with high rates of smoking, tobacco use, and an overabundance of tobacco sales.  What is most concerning, however, is how the bill would negatively affect Philadelphia’s most vulnerable citizens –its children.

“Smoking remains the number one cause of preventable death in America,” shared Johnson.  “Opening the door to even greater density of tobacco distribution will only lead to greater inequity and health disparity in our population, jeopardizing  ​the health, productivity, and economic well-being of Philadelphians,” he continued.

Philadelphia already has twice as many tobacco retailers per capita as New York and other large cities, many of which are located near schools.

HFP's Statement in Response to the Murder of George Floyd