Messages of hope and healing 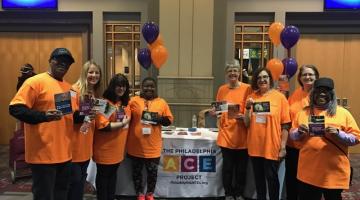 Philadelphia – Throughout the morning a crowd gathered around the Philadelphia ACE Project table during Philadelphia’s annual Block Captain Rally, which was held at the Pennsylvania Convention Center on March 25, 2017. Members of the Philadelphia ACE project held raffles and giveaways to raise awareness about adverse childhood experiences (ACEs) and collect feedback on a new community awareness campaign.

“The Philadelphia ACE Project has primarily been an inter-professional task force focused on building knowledge and practice from professional to professional,” explained Carolyn Smith- Brown, the administrative manager for special initiatives with the Health Federation of Philadelphia (HFP). “We all felt like it was really important that our communities have information about ACEs. It’s not a household name that people recognize. We want to start to change that.”

So what are ACEs?

ACEs are events like abuse, neglect, violence and trauma that happen between birth and age 18. Research shows that experiencing trauma during childhood can have serious lifelong effects such as struggles with education and behavior, substance use disorders, depression, diabetes and heart disease. Since 2012 the Philadelphia ACE Project has focused on developing research, policies and practices that can treat and prevent ACEs and improve the health and wellbeing of children and families.

“The bad news about ACEs is that they can have a life-long impact on health and well-being. The good news is that with supports people can heal from ACEs. The even better news is that ACEs can be prevented,” said Leslie Lieberman, senior director of special initiatives and consulting for HFP. “You can’t solve a problem until you know what it is. That’s why I believe it is our moral imperative to share the news about ACEs with as many people in Philadelphia as we can.”

The Philadelphia ACE project initially created a joint group of task force and community members in May of 2015. The group identified three important audiences to help raise awareness about ACEs – youth, parents of young children, and older adults.

Each group followed their own process. The group focused on youth held a youth gathering focused on introducing the idea of ACEs. An ACEs design challenge grew out of the youth gathering, which culminated on April 14.

The other two breakout groups crafted messages of awareness that were tested at the Philadelphia Block Captain’s Rally through a survey. “ACEs are not a light topic, but there are real messages of hope and healing,” said Smith-Brown. “We wanted our messages to catch people’s interest in the topic, but also present serious information about it.”

The survey results were overwhelmingly positive.

Over 130 people responded, and there was a groundswell of interest in follow up presentations about ACEs for community members and individual city blocks.

“A lot of people don’t know anything about ACEs, but once people become aware, they may want to seek additional information,” said Diane Monroe, a community member of the Philadelphia ACE Project who lives in the West Poplar section of North Philadelphia. “They need the opportunities to become aware, and information about how they can seek help if they need it. And they can help spread the word, too. That will build on that first awareness.”

Anthony Ballard, another Philadelphia ACE Project community member and resident of the 14th Ward on East Poplar added, “one of the best benefits was seeing how widely unaware people are about ACEs. It benefits us because we know that there is work that definitely needs to be done.”

Ultimately the Philadelphia ACE Project wanted to create something that resonated with people and they would want to repeat to others. They succeeded in their goal at the Block Captain Rally and are planning their next steps.

“It’s not the end. There is still more work to be done,” said Monroe. “This was just phase one. People want to know more. They want to be educated. Phase one is not the only one.”

Photos from the Event