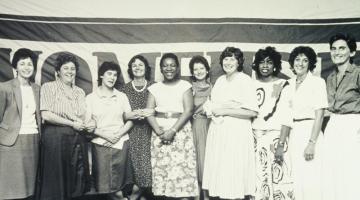 Philadelphia – Ann Ricksecker, HFP’s Associate CEO, was honored at the Women’s Way 40th anniversary Powerful Voice Awards on May 11th. Ricksecker was recognized for her role as a groundbreaker within the organization, which was founded in 1977.

According to the event program, groundbreakers were honored for finding the “courage, vision and energy to launch the federation, secure funding for Women’s Way and member agencies and guide participation in workplace giving programs.”

Women’s Way is a local fundraising and grant-making organization that is dedicated to empowering action for women in the fields of reproductive rights, violence, leadership, gender equality and economic security.

Ricksecker’s early involvement was as the executive director of CHOICE, a founding member agency of Women’s Way.

“Women’s Way has caused change that has made my voice and all our voices more power powerful,” said Ricksecker.